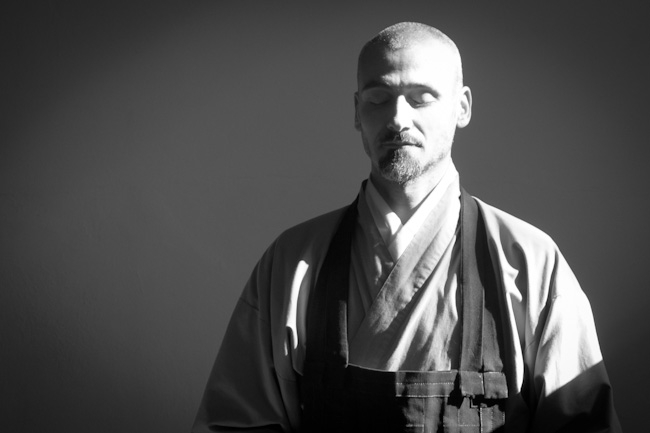 As we have said before, at the beginning of zazen you breathe several times through the nose and exhale through your mouth. From here the breathing should be completely silent and nasal. Many beginners ask me: “should I control or force my breath?” My answer is: “ what is known intimately can only be controlled”. The first thing a beginner should do is carefully observe its breathing and become intimate with itThe most important areas that act directly on the breathing are: rib cage, dorsal muscles, chest muscles, diaphragm, intercostal muscles and abdominal muscles.

According to the level of performance of these areas, we can say that there are three essential breathing types:

A. High or clavicular

It is the most superficial of all. Inspiration predominates on the exhalation. It is a breath of people excited and excitable. This breathing involves the thoracic, pectoral muscles, and very weakly, the diaphragm.

Exhalation becomes already more profound thanks to the pressure of the intercostal muscles on the chest. This breathing can happen only with a flexible diaphragm, which requires a certain relaxation of the dorsal muscles.

Trough my experience at the dojo I can say that the majority of people, in the modern era of big cities, come with a rigid diaphragm that prevents long and deep exhalation. Therefore the first step consists on softening the tension of the diaphragm.

Abdominal breathing implies the use of the diaphragm.  When we inhale the diaphragm expands toward the internal organ of the abdomen, called hara or kikaitandem (ocean of energy) in Japanese ,provoking an expansion of the belly. When we exhale the diaphragm moves upward and the belly goes inside.  During this breathing the lungs drain completely so that  a greater amount of fresh air is inspired each time.

In this breathing exhalation  is longer and more powerful than inspiration. This kind of breathing is the perfect breathing to perform during  zazen, so that we all should aim to it during practice.

But you have to be careful: many practitioners get confused  at this point, since they try to force a long and powerful exhalation without understanding before the full mechanism of breathing.

If, for example, the diaphragm is stiff and we try to press on the abdominal muscles, we end up causing an internal conflict both  in the body and .