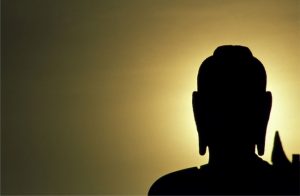 In fact, the methods of yoga during this time  was reduced to strong asceticism like food deprivation , extreme fasting, or standing on one leg.

Through this and a series of exercises, the yogi trained himself  not to be affected by  external stimuli and control the slightest movement of his own spirit.

The Buddha practiced this yoga for twelve years from the time he decided to renounce the world. He  met with great  saints and scholars, covering the four corners of the country. Finally Buddha din not find trough yoga the answer to two essential questions: What is man? How should man live?

Zen was introduced to China by Bodhidharma, a teacher representing the twenty-eighth generation of disciples of the Buddha. At this time China was divided into rival states struggling  for power. The country was under tyrants and torn apart by rebellion.

The Liang dynasty ruled over one of the states of ancient China. The Emperor Wu-Ti, the head of this dynasty and  a convinced Buddhist, heard about Bodhidharma and received him in his palace. When Wu-Ti asked him: «What is the fundamental principle of Buddhism?» Bodhidharma replied, «A huge void. A clear sky. A sky in which the enlightened are indistinguishable from the ignorant. The world itself as it is.»

Wu-Ti, even though he was a fervent Buddhist, did not understand the message of Bodhidharma.The latter knew that was to early to spread  Zen in China so he crossed the Yangtze River and retired in the northern mountains, in the Temple Shorin.

In Japan only Rinzai and Soto schools achieved an important implementation, the first due to Eisai and the second one to Dogen and  Keizer. Rinzai tradition is based on strict discipline aimed at disrupting the mental creations. The Koan ,a difficult enigmatic question ,is of great importance and its resolution, beyond the intellect, leads to the experience of Satori and Awakening.

The Soto tradition mainly   focus the attention on the Way of the Buddha, that is, following the daily life of Buddha,  approching realization  trought   daily practice, without expecting anything special. The essence of Soto is Shikantaza: sit, just sit.

With Master Dogen (1200-1254) Soto tradition and the essence of Buddhism reached  the top of its maturity. His masterpiece, the Shobogenzo is the  key for the  understanding of Buddhism and all Oriental civilization.

Zen has had a profound influence on the daily life of Japanese people. This influence can be seen in every aspect of Japanese life: food, clothing, paintings, calligraphy, architecture, theater, music, gardening, decorating, etc.

Even today, despite the fact that many Japanese do not know what  Zen is, the imprint of this teaching  can be seen on their behavior and manifestatios; deeply  into the japaneese souls.