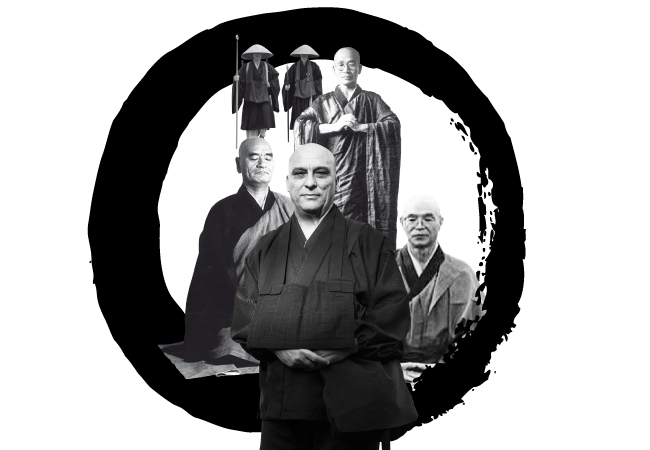 The tree of the spiritual genealogy of Zen Buddhism is rooted in the Buddha Shakyamuni and has grown along different lineages.The lineage that follows is perpetuated in our community through Dharma Master Dokushô Villalba Roshi.

Kodo Sawaki Roshi has been one of the greatest masters of Japanese Zen modern history. Popularly known by the name «Kodo the homless» because he always refused to live in a temple and preferred to travel the country, always traveling alone, teaching zazen in prisons, factories, universities, where there someone willing to hear the Dharma and practice it.

He taught at the University of Komazawa Zen, was educated at the second monastery in Japan Soto, the famous Soji-ji. His teaching can be summarized in two points: accuracy in the practice of zazen and constant study of Master Dogen`s Shobogenzo.

He died in 1966, having taught all his live both to lay people and monks. His body was handed over by his wish to the Faculty of Medicine, Tokyo.

Shuyu Narita Roshi was the first disciple confirmed into Dharma by the Master Kodo Sawaki.

In 1977, during the tenth anniversary of Master Deshimaru Roshi in Europe, Shyu Narita Roshi visited for the first time the continent.

In April 1983, Shuyu Narita Roshi transmitted the Dharma of the Buddha to Taiten Guareschi, one of the oldest disciples of Deshimaru Roshi, promoter of Zen in Italy. In April 1986, Shuyu Narita Roshi again convey the essence of his teaching to Ludger Tenryu Tenbreul another of the oldest disciples of the Master Deshimaru , currently chairman of the Association of German Zen.

After the death of Deshimaru Roshi, DOKUSHO Villalba, continued studying the Dharma under the direction of Shuyuan Narita Roshi and in 1987 was confirmed as his legitimate successor.

Taise Deshimaru Roshi was born in Saga, Japan, in 1914. He studied economics and political science in Tokyo and worked several years for the first company in the country, the Mitsubishi. Stilla young boy, he met Master Kodo Sawaki and became soon his disciple . Since then and for thirty years he follows his master everywhere. After the death of Kodo Sawaki Roshi Deshimaru comes to Europe, marking an important turning point in the history of Zen and European culture.

Indeed, it was the first authorized teacher by the Japanese Soto School to implement the seed of Zen in Europe.

During fifteen years of hard work, dedicated to the expansion of Dharma and the training of the early Zen monks in Europe, Deshimaru Roshi embodied the real Zen spirit transmitted by the Patriarchs. More than a hundred centers across all countries of the continent, more than three hundred monks and thousand of lay disciples confirmed him as the First Zen Patriarch in Europe.

Deshimaru Roshi received Dharma transmission by Yamada Reirin Zenji, abbot of Eiheiji, one of the two major Japanese Zen monasteries. His sudden death prevented him from transmitting the lineage to any of the European disciples.
Master Dokushô Villalba is the founder of the Spanish Soto zen Buddhist Comu nity and the Temple Luz Serena.